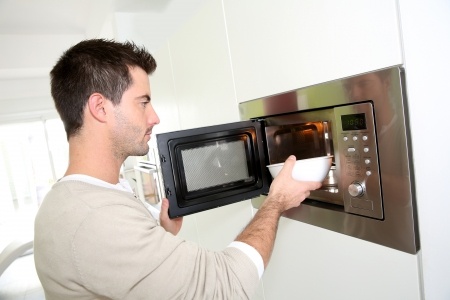 Almost every first world kitchen is home to a microwave oven, but a growing percentage of people are beginning to question whether this appliance is an invaluable convenience or a dangerous source of biological and nutritional damage. Holistic health experts are united in their opposition to microwaves.

Microwaves actually change the molecular structure of food. They emit electromagnetic energy (a form of nonionizing form of radiation) and cause an inner rotation of the water molecules inside the food. This rotation precipitates a friction between the molecules, resulting in a rapid increase in temperature. The super-fast particles created by microwave ovens literally radiate the water content inside food, bringing it to a boil. This process denatures many of the essential proteins in food, rendering them nearly indigestible.

Unlike animals, which will only eat food in its natural state, human beings now process their food to the point it is virtually nutritionally worthless before we eat it. Microwaving food is simply another step in the same direction.

Microwaves affect physical, biochemical and physiological changes in foods, producing ions and various free radicals that destroy viruses and bacteria, but they do not eliminate toxins and microtoxins. Food cooked in microwave ovens lose between 60 and 90 percent of its vital energy as the process of structural disintegration accelerates.

No organic system can withstand the destructive power of microwave ovens, even in the low energy range of milliwatts. The appliances quickly destroy the molecules of vitamins and phytonutrients present in food. One study showed that up to 97 percent of the nutritional content in vegetables is destroyed during microwave cooking. We need these vitamins and other plant-based nutrients to maintain health, stave off disease and boost our immune function.

A study conducted some years ago by the Swiss Federal Institute of Technology and the University of Biochemistry studied the effects of microwaved nutrients on the blood and physiology of human beings. The researchers demonstrated that microwave cooking changed the nutrients in the food, and stated that the changes in the participants’ blood could cause deterioration in the human body.

The adverse health consequences associated with microwave ovens include infertility in men. Digestive disease can result from the changes to the molecular structure of microwaved food. Also, microwaves increase the number of cancerous cells in the blood, stomach and intestines.

Leaking radiation is another serious problem with microwave ovens, and it is known to cause cataracts, birth defects, cancer and other serious health conditions. The Food and Drug Administration (FDA) has set legal limits on the leakage permitted, but the only way to truly eliminate the dangers from radiation in microwaves is not to use one.