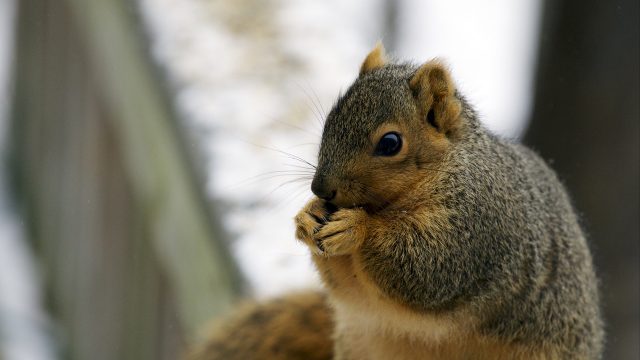 Squirrels, rats and mice are getting fatter.  Why should you care about pudgy rodents?  Because it might be a clue as to why nearly half of America is obese.

Since many city rodents eat our garbage, basically the tail end of our food supply, and it’s affecting their health.

Could fat rodents be a clue about what is happening to us?

Rodent studies are often used to study the effects of different chemicals and check for cancer-causing chemicals and drug interactions.

And in the wild, they seem to be getting fatter.

It’s been shown that when rats are given the choice, they will choose a junk food diet.

And they can’t seem to know when they are full when they eat processed food, which is one of the reasons some scientists think our modern diet is contributing to our obesity problem.

According to Frontiers in Psychology:

“A range of animal and human data demonstrates that excessive consumption of palatable food leads to changes in the sensitivity of brain reward circuitries. These reward pathways are highly conserved across species and have been associated with altered responsiveness to reward (e.g., food) in obesity.”

While there are no scientists tracking obesity like we do in people, there is a surprising new trend to give credence to this observation…our pets are getting fatter too.

A group has been formed to fight the rise in obesity in pets.  Pet Obesity Prevention estimates that nearly 60% of America’s pets are fat, and while this has plateaued, it does go along with the rise in human obesity in America.

What this means is that the real solution in helping people lose weight may not be as simple as reducing calories, but fundamentally changing what we eat.

The Standard American Diet (SAD) is 57% processed foods.  If animals have problems regulating their input of calories because they can’t tell when they are full, then some think we may have the same problem.

And strangely we often think we can increase our calorie intake after going to the gym.  We think we deserve a treat because we burned 500 calories on the treadmill.  Since we often got sweets as rewards as kids, this seems to be hardwired into us.

But this was confirmed by the rodent studies that shows how processed food actually activates the reward centers in the brain.

So, is there little wonder that foraging creatures who have access to our trash cans will be drawn to processed food too?  And if this is true, then our food choices will have a trickle effect down the food chain.

This was first noticed at Yellowstone Park when park rangers had to start warning people to quit feeding the bears because our highly processed foods were making the bears sick. It’s not that bears get attracted to human food and become a danger to people, our diet makes them less healthy.

Bears are omnivores so they can eat anything, and humans do well eating what bears eat when they are in the wild, but when bears switch to a SAD diet, they get sick and their health declines.

There was even a book written called The Bear Diet which pointed out what we can learn about the effects of what we eat on our health when we see a decline in bear health when they eat what we do.

So fat squirrels, rats, pets and even bears may be telling us we are eating the wrong diet if we want to be healthy and lose weight.